Old School Lacrosse is a place to discover and tell the story of these great players and pioneers from a century ago, their photographs, and their relevance to the history of lacrosse in the province of British Columbia and in Canada. 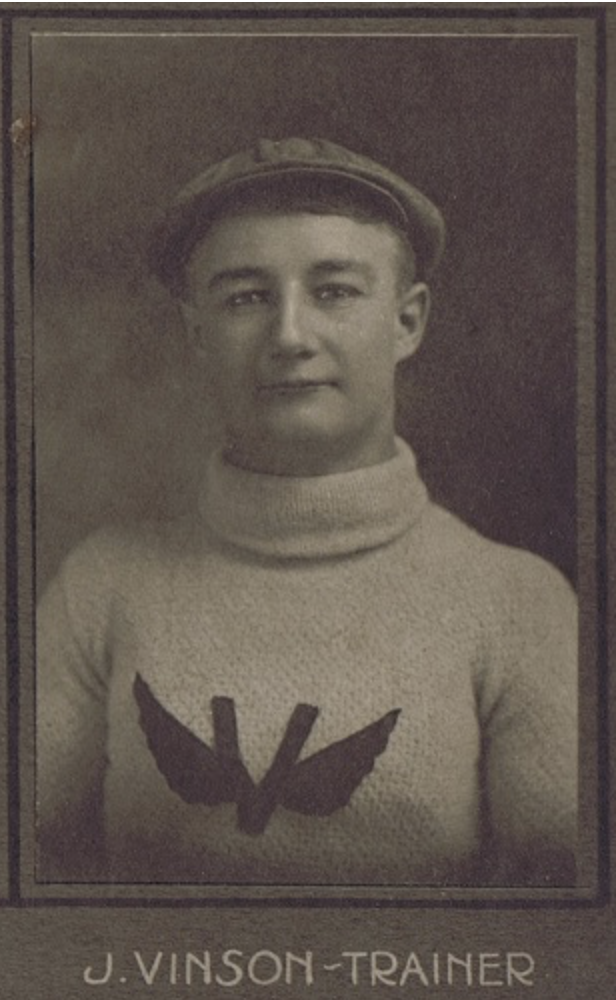 An Australian by birth hailing from Sydney, New South Wales, when exactly John 'Jocko' Vinson arrived in Vancouver and became associated with the Vancouver Athletic Club and their championship lacrosse team is unknown, as facts about his life prior to the outbreak of the First World War are scant and fleeting.

There is no mention of him in Vancouver newspapers prior to January 1910, although one article printed in 1917, after his passing, mentioned that he had been involved in Nanaimo sporting circles prior to "drifting across the gulf" to Vancouver.

As the trainer for a sports team, very little press would have been written about his role with the Vancouver Athletic Club except it is clear that Vinson was highly regarded and well-known in both local and national sporting circles. 'Jocko' Vinson was involved with the Vancouver Athletic Club lacrosse team during their hold over the Mann Cup as national senior amateur lacrosse champions from 1911 through 1913 and into 1914. While he never played lacrosse, he was nevertheless quite an athlete himself and Vinson held a number of world champion rope-skipping records, including one claimed record of 12,023 skipped in 74 minutes on May 18, 1913. He worked as a trainer in horse racing and fought boxing matches as a lightweight, weighing in at 120 to 122 lbs.

An interesting and rare detail on his lacrosse career, it was reported he talked Bill Peacock into signing with VAC, beating out Con Jones and his professional Vancouver Lacrosse Club outfit for the services of the young, promising player.

On October 30, 1912, Vinson set sail from Vancouver on the New Zealand ocean liner SS Marama to visit his parents in Australia for a three-month period. He remained there in his native land until he set sail on the SS Makura to make his way back to Canada, arriving in Vancouver on the morning of May 1, 1913.

Described as an "all-round good fellow, always bright and cheerful and immensely popular", 'Jocko' Vinson appears in all lacrosse team photographs for the Vancouver Athletic Club during their championship years – often wearing his trademark white sweater and suspenders and sporting a tweed cap. His occupation on his military records on enlistment in 1914 state he was a farrier, a specialist in horseshoeing. He appears to have been a bachelor as his half-brother in Australia is listed as next-of-kin.

When the Great War broke out, with enthusiasm Vinson once again answered the call to arms. Within two days of the British Empire declaring war, he enlisted as a member of the first contingent of the 11th Irish Fusiliers that departed from Vancouver for the front lines in Western Europe. He would serve in Belgium with the 7th Battalion, Canadian Infantry (British Columbia Regiment).

Corporal John Vinson fought in the Ypres campaign and was seriously wounded in April 1915 during the Battle of St. Julien. His heroic exploits saw him fighting off enemy attackers with bayonet and in the process leading his men in seizing a farmhouse and gun position. Wounded and begging to be left behind with a gun, to pick off German soldiers before they got to him, he had to be dragged back under protest to the safety of a shelter. News of his actions in combat reached back home in Vancouver and his heroics were reported in the local press while his gallantry earnt him special mention in military dispatches. 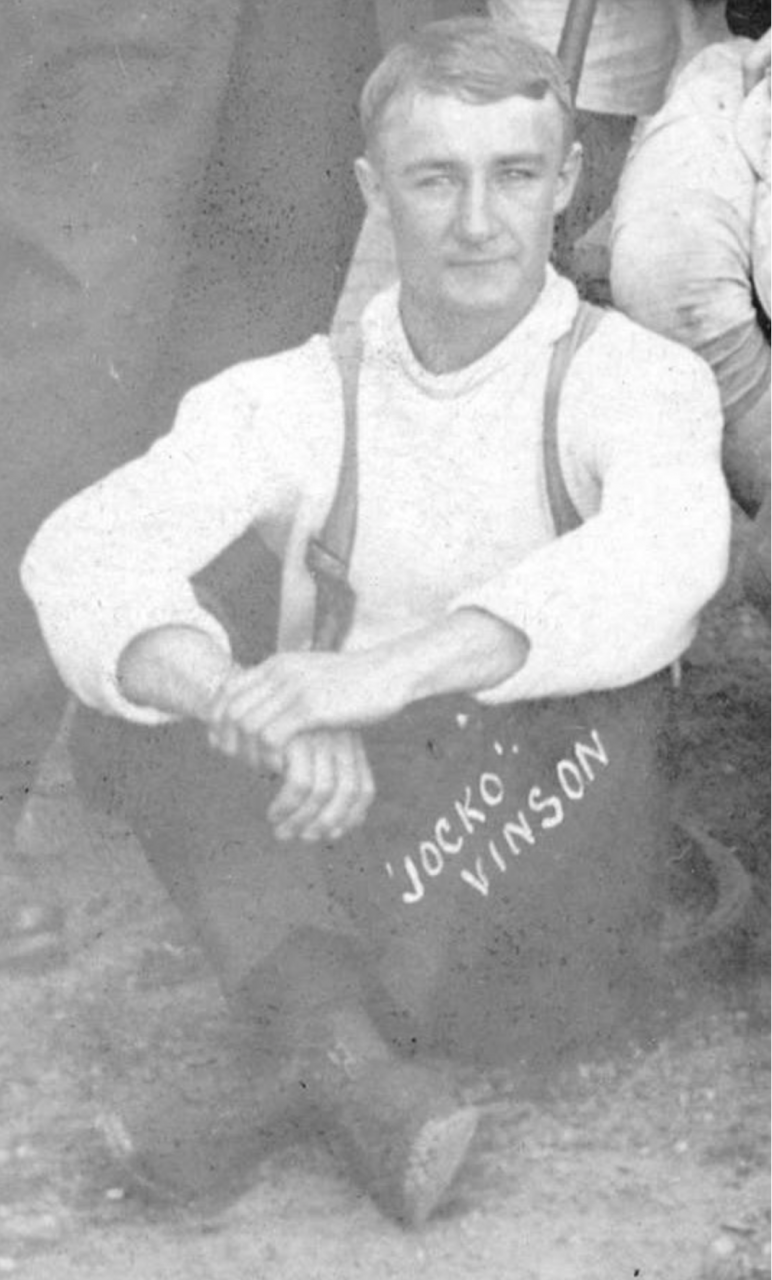 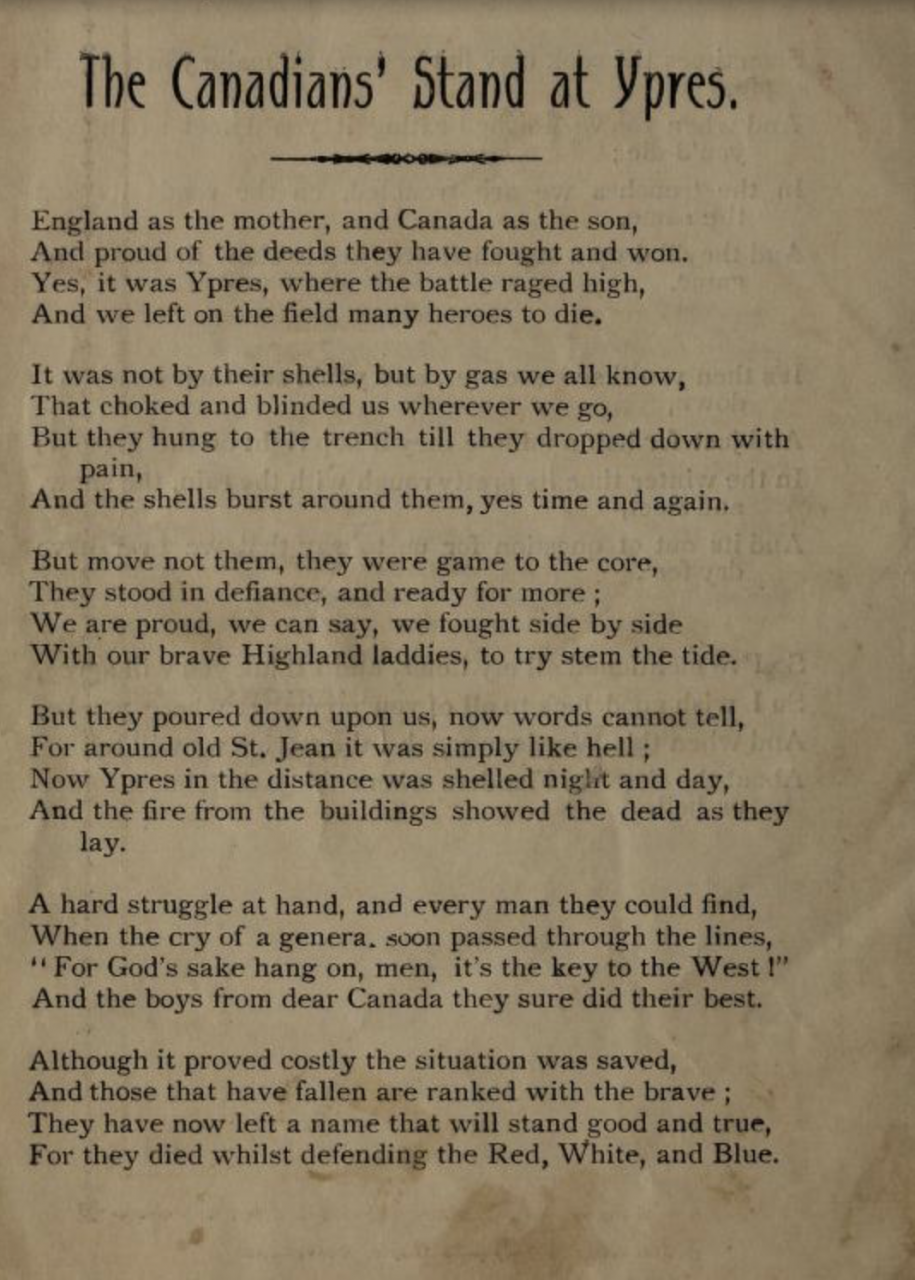 Writing about it in 1915, Ypres in Belgium would ultimately become Vinson’s final resting place the following year.

While convalescing from his wounds, Vinson wrote poetry about his experiences and observations in the war. In August 1915, a small collection of five poems was published in England. After ten months of recuperation, he recovered sufficiently enough from his injuries that he insisted he be returned once again to the front lines.

Ypres would become Vinson's final resting place when he was killed in action on April 15, 1916, a day before the final German push convinced the divisional headquarters the hopelessness of their situation and declared an end to the engagement.

The Battle of St. Eloi Craters ended in a German victory as half the Canadian contingent surrendered and the other half crawled away in retreat. More than 1,370 Canadian soldiers, Corporal Vinson amongst them, stood their ground and gave their lives on the muddy, cratered quagmire that was the battlefield at Ypres. Newspapers in Vancouver and Victoria printed special tributes about the beloved 'Jocko' Vinson when news of his death reached home two weeks later in the first days of May 1916.

He has been a member of the board of governors and an historian for the Canadian Lacrosse Hall of Fame in New Westminster, British Columbia since July 2012.

Beginning in 2002, he has compiled the Canadian Lacrosse Almanac as an annual compendium of league standings and history covering Canada, the United States of America, and overseas. Initially printed in April 2002 as a 102-page softcover book with a print-run of 200 copies, the Canadian Lacrosse Almanac was inspired by sports writer Jim Hendy and his pioneering work The Hockey Guide which first hit the shelves in 1933 and remained in yearly production until 1951.